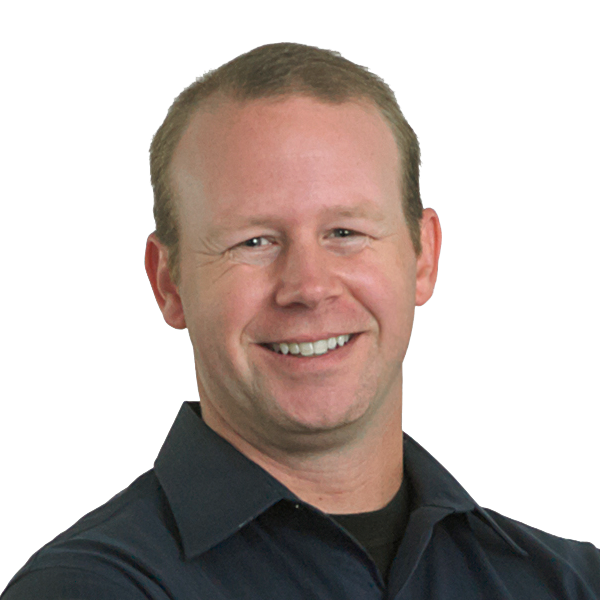 Moving past natural gas and electric boilers to achieve the industry’s decarbonization goals.

For pharma and biotech manufacturers, keeping up with this cultural and regulatory shift toward meaningful climate action and corporate sustainability goals is a complex challenge. It takes a lot of energy to manufacture a drug; sourcing that energy sustainably involves a matrix of innovative solutions. As sustainability in pharma manufacturing gains momentum, there is one opportunity for significant energy efficiency and decarbonization that is often overlooked: the plant’s heating design.

A sustainable heating strategy for pharma

Too often, engineering and design teams reduce their heating design’s carbon footprint by simply electrifying their steam and heating hot water boilers. There are good reasons for that: electric resistance boilers are a familiar technology, and they perform reliably (hot water boilers are capable of heating water to 180°F, for example). Plus, the pathway from gas-powered to electricity-powered steam or hot water generation is relatively straightforward, with no complex mechanical engineering required.

But thinking of electric boilers as the best path toward decarbonization for a pharma facility is a mistake. Choosing to rely heavily on electrified steam and hot water boilers diverts facilities away from much more efficient energy strategies. For that reason alone, electric boilers ought to be the last resort within pharma’s sustainability strategy.

The intense electrification from an electric boiler strategy also precipitates a surge in energy demands that some utility districts may not be ready for, which could actually strain the plant’s redundancy strategy—does your plant have sufficient backup and energy storage available in case of a grid failure?

Decarbonization for the pharma industry goes beyond electric boilers

A pharma facility’s heating needs are vast. Sterilizing cleanroom environments, producing water for injection (WFI), maintaining a comfortable working temperature, and managing snowmelt—all of these functions rely on a source of heat. The thing is, only a small fraction of them actually require steam boilers.

Sterilization is the exception. Today, it’s only possible using steam, and steam relies on boiler technology. Thus begins a slippery slope towards “boiler dependence”: once a pharma facility has steam boilers in place for sterilization, they’re incentivized to use that steam elsewhere in order to keep the boilers online and avoid frequent shutdown and startup cycles. In other words, the steam boilers often becomes the go-to heat source for all functions simply because it’s there.

When a pharma client recently asked the CRB team to audit their thermal energy use, we discovered that of the 12 systems currently using steam, only three actually require it—just 16% of their current steam-based processes. 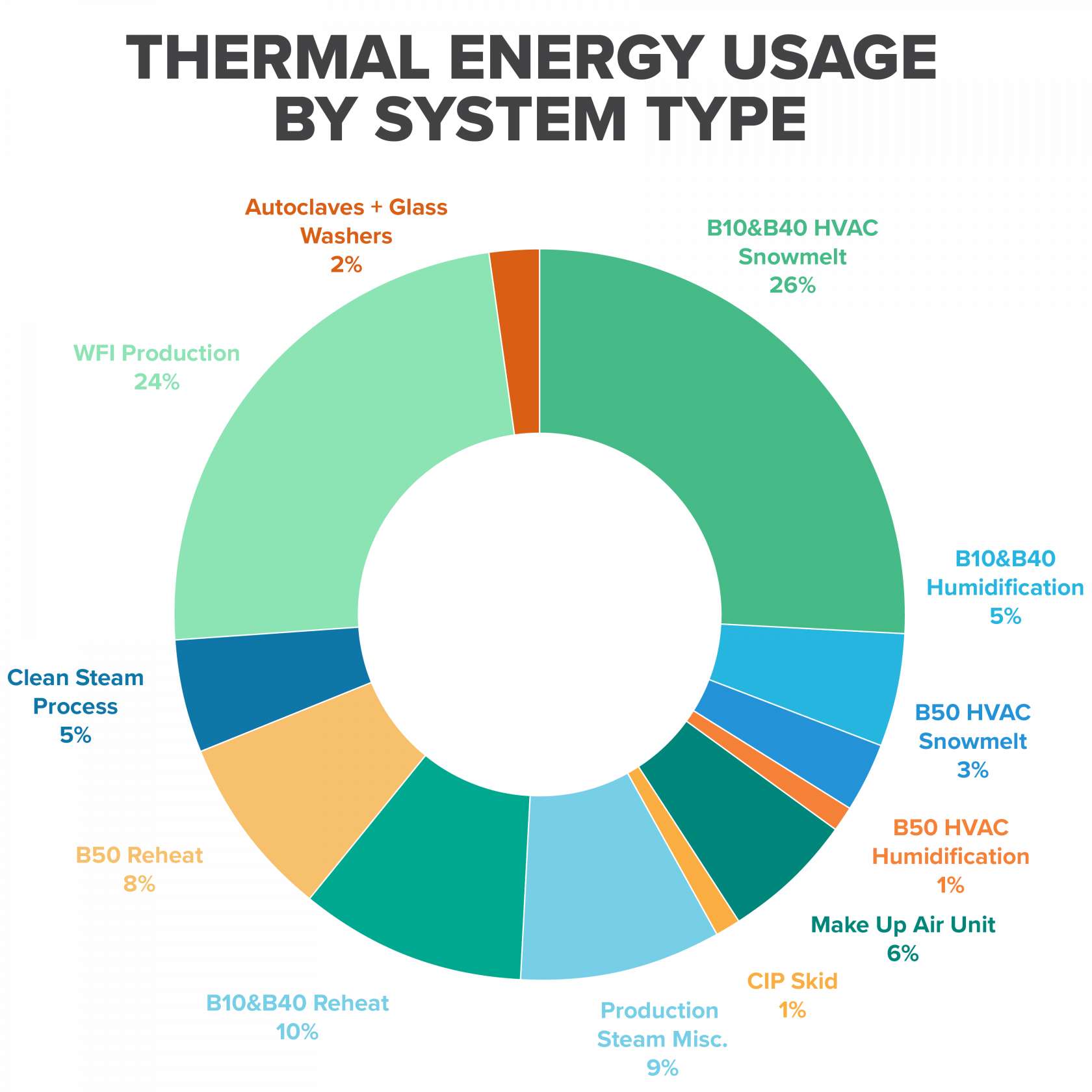 So how can facility teams design excessive boiler dependence out of their plants and turn to more efficient, economical, and sustainable solutions for meeting their heating needs and decarbonization goals? A sustainable heating strategy focuses on three Rs: reduce before you produce, recover energy, and reverse-cycle heat pumps.

This strategy draws from the familiar concept of the conservation pyramid, which can take many forms but typically starts with proactive decision-making (reduce before you produce), then moves to efficiency-intensive action (recover energy, rather than generate it), and concludes with technological solutions that embrace and enable the first two. Pharma and biotech companies can apply these principles across their plants to help achieve decarbonization goals; in the specific arena of sustainable heating design, this three-pronged approach develops a virtuous cycle of reduced demand and increased reuse.

A well-designed heat pump system maximizes energy efficiency gains. Unlike electric resistance boilers, which convert energy and are therefore subject to the first law of thermodynamics, heat pumps are designed to move energy. That puts them in a category all their own in terms of efficiency. While gas boilers offer an average Coefficient of Performance (COP) of 0.9, plant owners can use heat pumps to reach a COP north of 8.0. That’s a staggering 800%+ increase in efficiency. 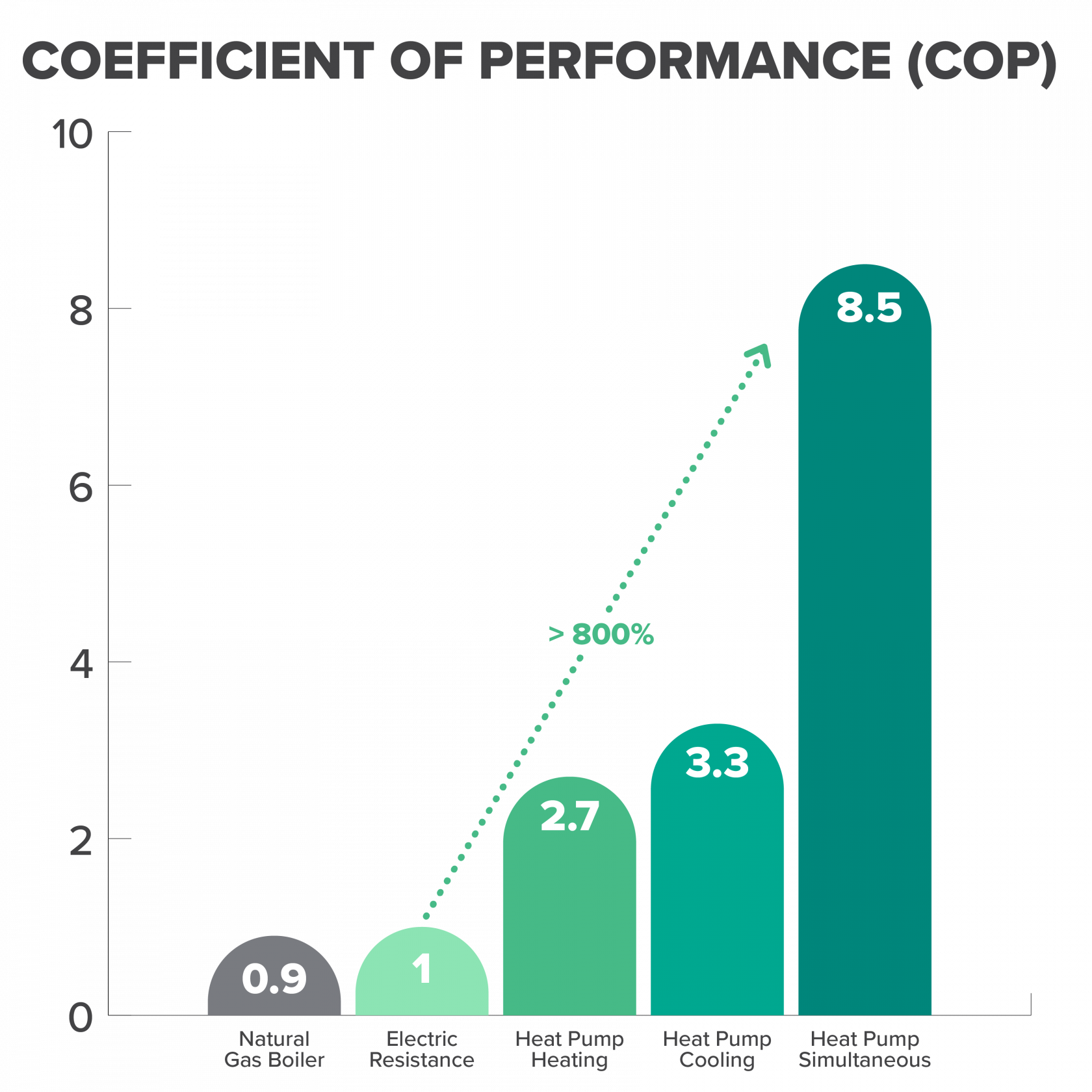 Meaningful environmental and financial sustainability in pharma is possible when facilities put this level of efficiency to use inside a plant that’s already reducing and recovering as much energy as possible.

Below is a hypothetical comparison based off of real-world, zero-carbon heating designs developed by the CRB sustainability team. Through our work, we typically find 50-75% energy savings. 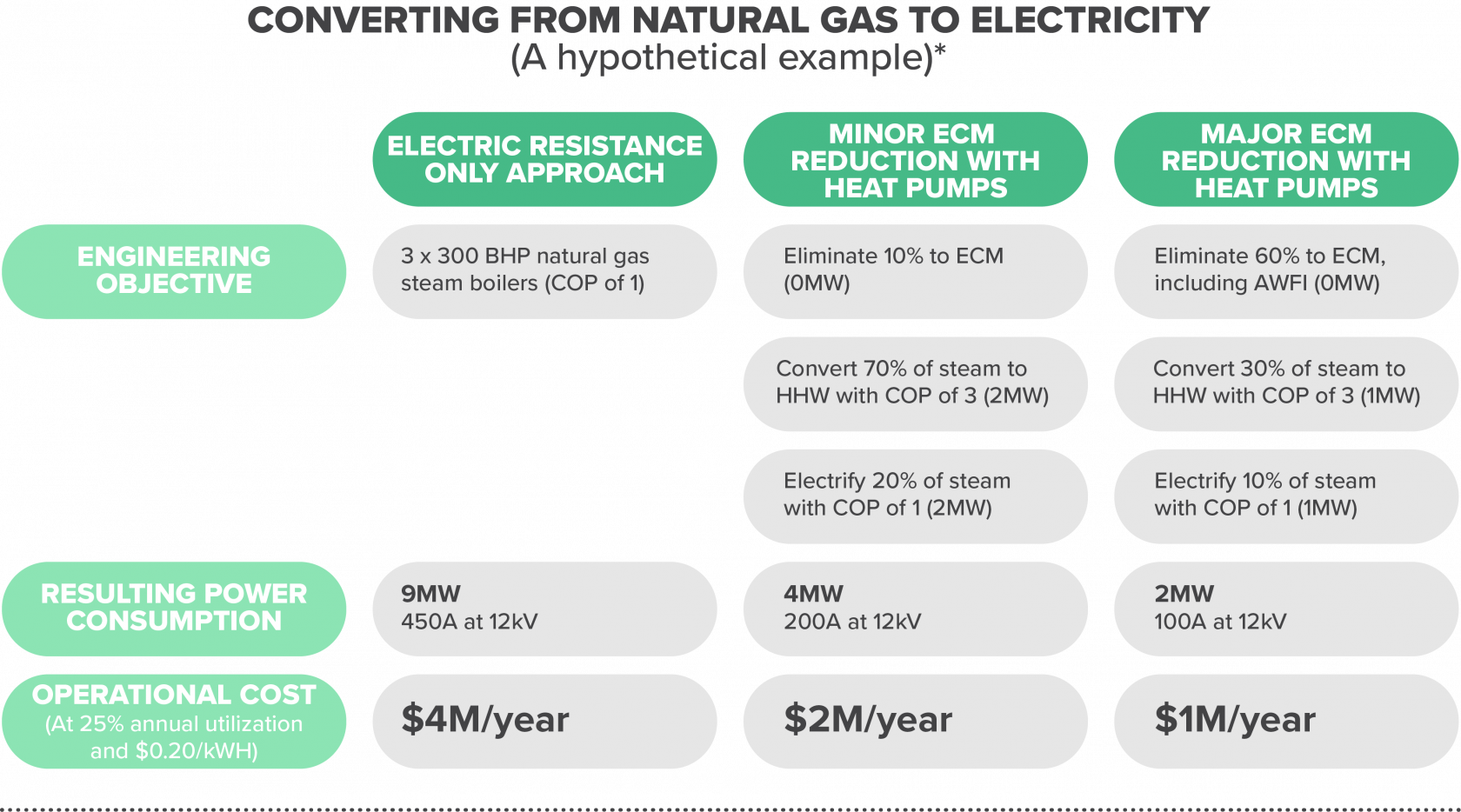 It’s not uncommon to: 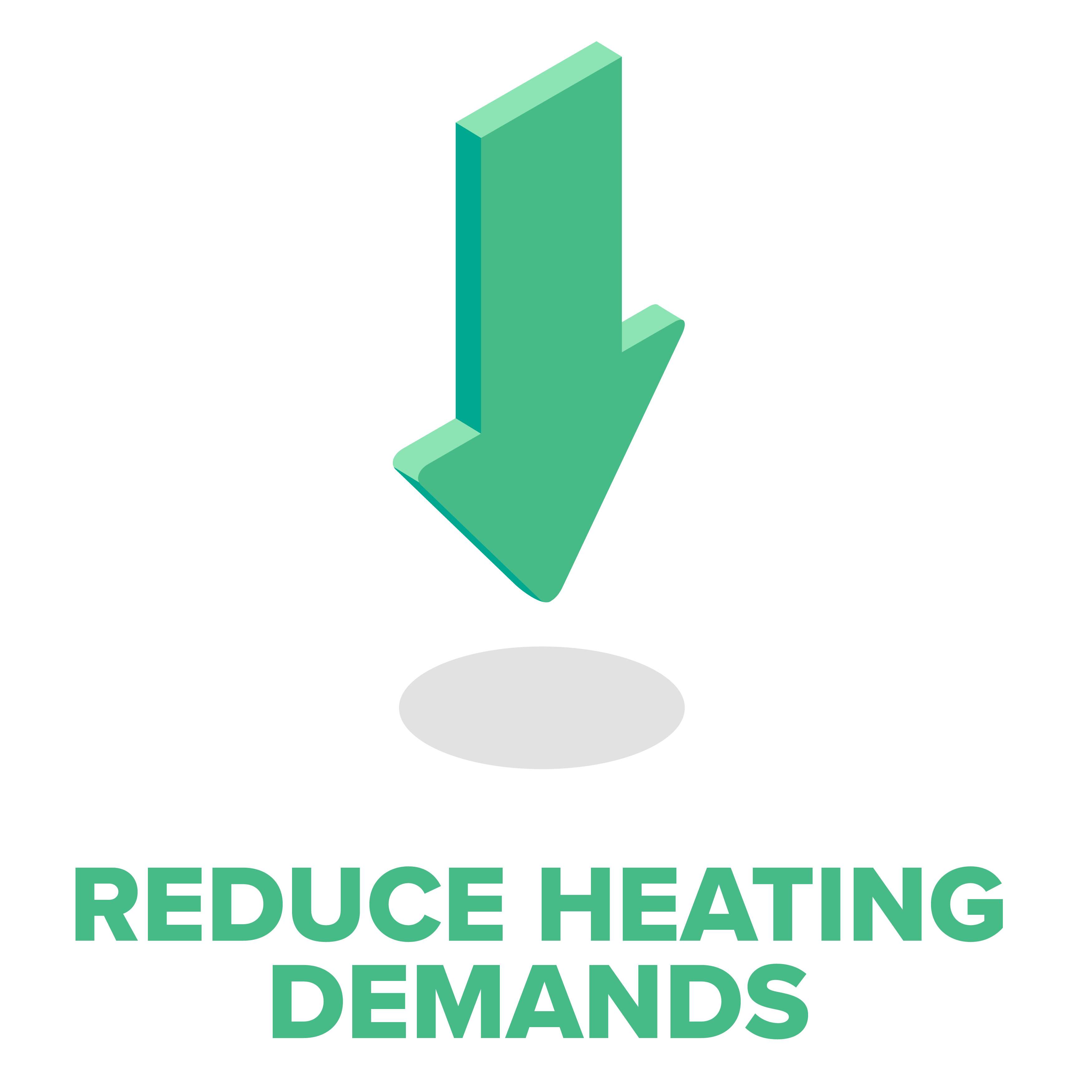 It’s much easier for project teams to lower a manufacturing facility’s carbon footprint and improve energy efficiency in a meaningful way when they establish corporate sustainability goals from day one to support a proactive design approach. It is in those early days of design that reduction best practices need to be introduced, planned for and incorporated. That’s why “reduction” is the first step toward decarbonization. Achieving similar outcomes through renovations or incremental process improvements in an existing plant is possible, but it is much more difficult and expensive.

In the context of sustainable heating design for a pharma manufacturer, reduction can take many forms, including:

Methods of water for injection generation have the potential to significantly reduce a plant’s heating load, and it’s a good example of the outsized role that steam production has occupied in traditional pharma manufacturing even as other, more sustainable options emerge.

Until 2017, manufacturers were required to distill their WFI if they planned to sell their product to the European market. This meant superheating feed water into pure steam before cooling it—a process that requires significant energy. In a recent CRB site study on behalf of a client, we found that 50% of the facility’s natural gas usage was attributed to this single process step. Even if that facility were to reduce their fossil fuel consumption by converting to electric boilers, they would still find themselves committing immense energy resources to WFI by distillation.

Today, the European Pharmacopoeia no longer requires distillation in WFI production. This regulatory shift has opened the door to more efficient approaches.

A client of ours recently walked through that door. This California-based commercial biologics CDMO began producing WFI without a distillation step—that is, their WFI is ambient rather than hot (AWFI versus HWFI). Using a continuous O3 sanitized storage tank with electrically heated backup sanitization, this client generates their AWFI using membrane-based techniques including two-pass reverse osmosis (RO), electrodeionization (EDI), and ultrafiltration (UF). This approach has freed them from the need for a facility steam system, which has helped them reduce their heating load and the associated costs.

2. How can pharma manufacturers recover heat?

If reducing the heating requirement inside a plant is the best first step, then recovering existing heat is a close second—and the two strategies work closely together, each complementing the other.

There are many avenues for efficient heat recovery inside the pharma plant, including:

One of the most effective ways to put this principle of sustainability into action is through an airside heat recovery system. Our clients are increasingly interested in this effective engineering strategy, including a pharma manufacturer who engaged us to retrofit an existing plant in Massachusetts with a more efficient heating design.

Before we began our work with them, this client used considerable energy to maintain a comfortable temperature of about 70°F inside their plant. To reduce this load, we designed a heat recovery system that uses glycol coils to absorb heat from the plant’s exhaust air during the winter months. That system leverages the recovered heat to raise the temperature of the incoming supply air from -10°F to about 40°F , thereby cutting the plant’s heating burden in half. (During the summer months, those glycol recovery coils perform the same function in reverse: they absorb heat from the supply air and expel it in the exhaust air, reducing the cooling burden.) 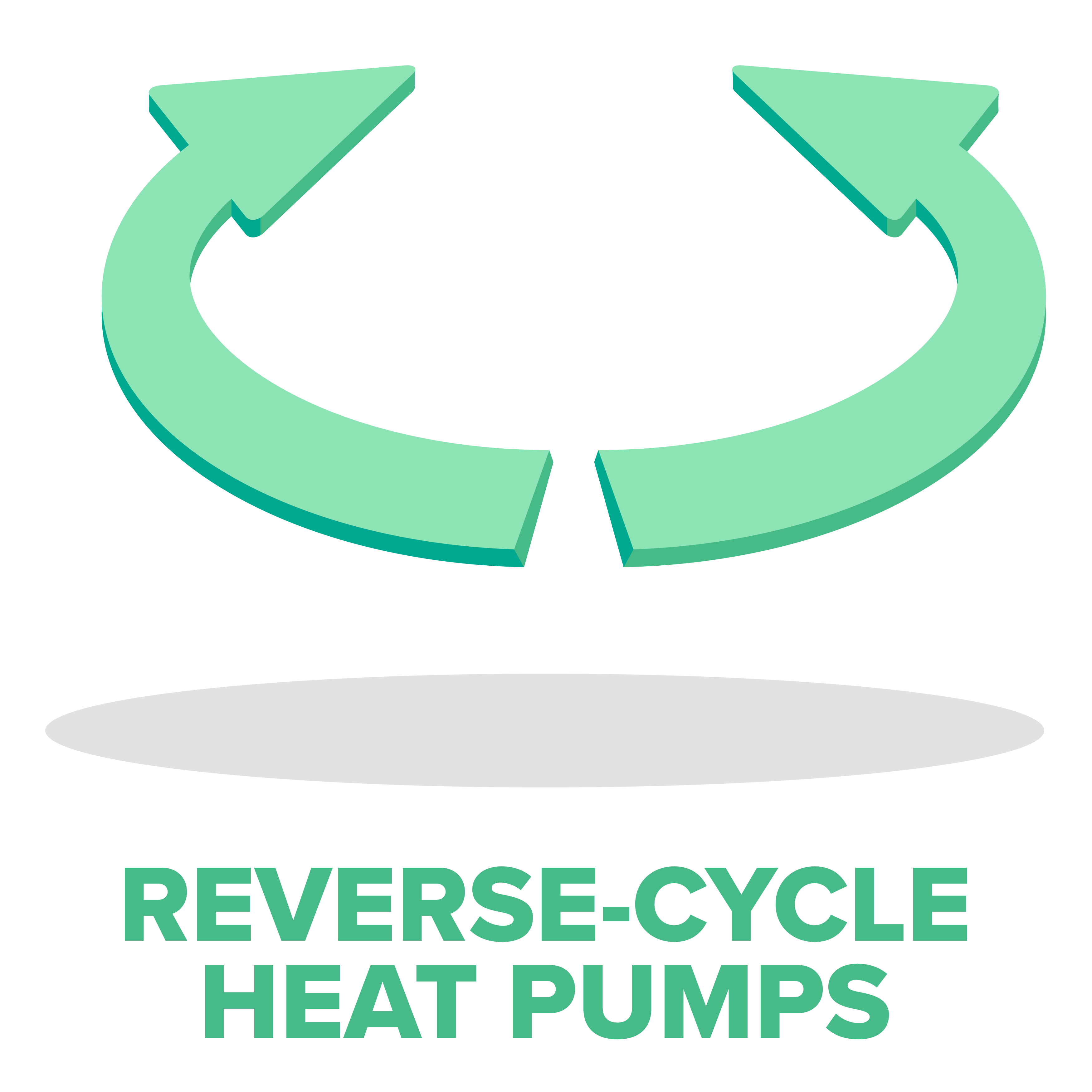 3. How does a reverse-cycle heat pump support heat reduction and heat recovery?

First, what is a reverse-cycle heat pump? A heat pump is simply a reverse-cycle chiller or air conditioner. Rather than discharge heat, this technology collects it from the ground, the ambient air around a facility, or another source and makes it available for a useful purpose. 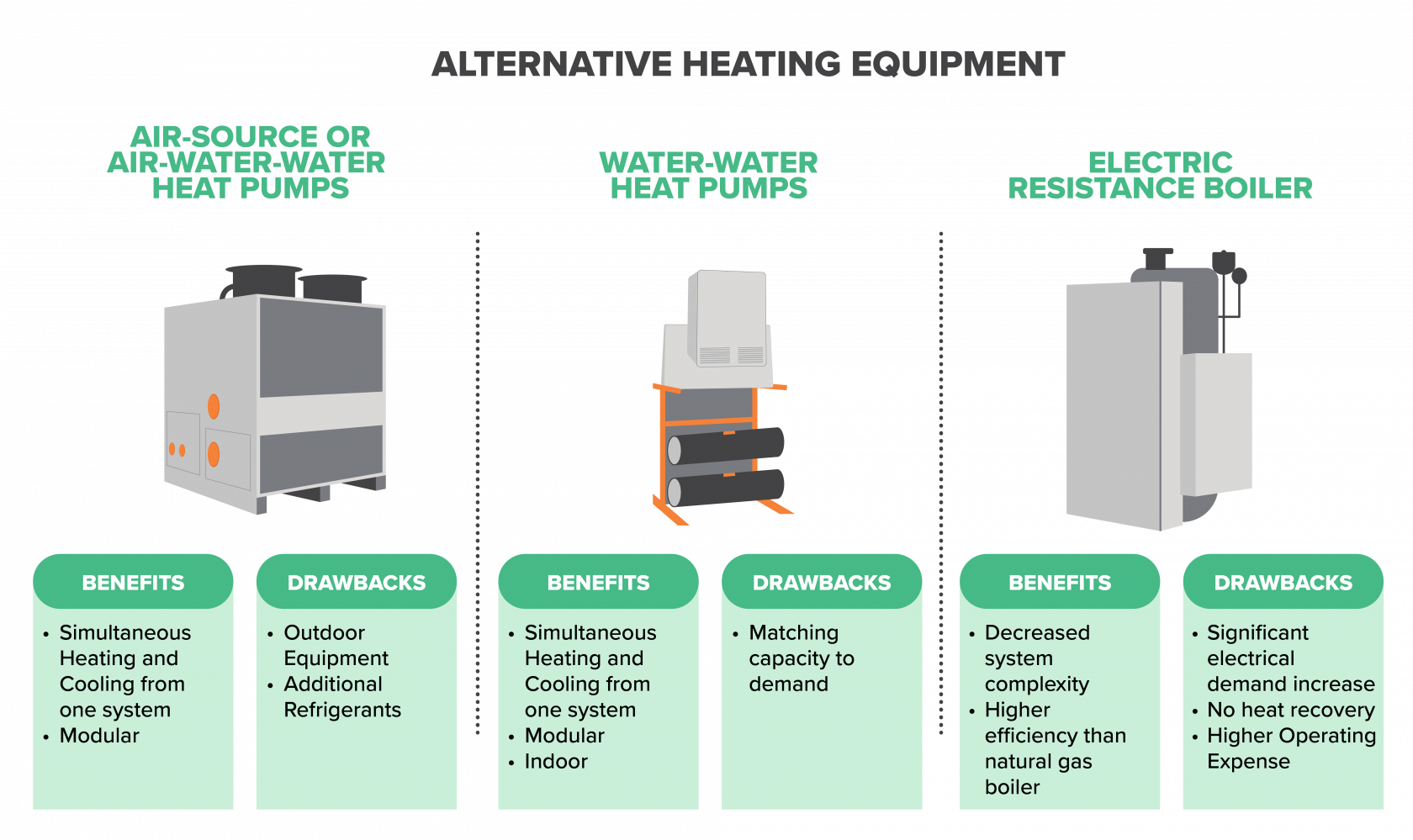 The heat pump isn’t new—it’s been at work inside vehicles and household appliances for decades. But taking that basic technology and applying it to a central plant design? That’s new, and it has the potential to eclipse electric boilers in terms of efficiency. As we’ve established, a system of integrated heat pumps can take a facility’s heating system from a COP of 0.9 (90% efficient) to a COP between 3 and 8 (300 to 800% efficient) by moving energy rather than simply creating it. This technology is a powerful tool in the pursuit of sustainable heating design, and an important enabler for heat reduction and heat recovery in the plant.

One of CRB’s sustainability-focused clients, a leader in sustainable cell therapy manufacturing, uses AWWHPs throughout their facility to maximize their use of existing thermal energy.

This strategy helps them to reduce and reuse energy inside their plant’s ecosystem. As a result, they’re capable of powering their entire operation with renewable energy. Achieving a similar outcome using electric boilers would cost them many times as much over the life of their facility; their AWWHPs get the job done without breaking the bank, and with a much lower environmental impact.

The future of sustainable heating design

As part of the life science industry’s shift away from fossil fuels, converting energy-intensive “dirty” heating designs to electricity is better than no change at all. Too often, though, electric boilers are treated as the full extent of the sustainable heating design strategy, despite their relatively low efficiency compared to alternative approaches.

When project owners commit to reducing and recovering as much heat as possible in the plant, and when they enable that commitment by engineering a system of integrated heat pumps capable of dramatically increasing the facility’s heating efficiency, they can have a much greater impact on their bottom line, their operational resiliency, and their decarbonization goals. This is one way that the pharma and biotech industry will help lead our planet toward a more environmentally responsible future.

Our team of sustainability experts can help you develop a decarbonization strategy to map your corporate sustainability goals to operational action within your pharma facility. Ready to take action?

More in Insights
Trade partners and subcontractors: What’s the difference and how to set the team up for success?
Return to top